Explaining The End Of Season 4 Of Sabrina’s Chilling Adventures On Netflix!

Chilling Adventures of Sabrina Season 4 is available on Netflix! If you want to know the explanation of the ending, keep reading! Season 4 of Sabrina on Netflix is ​​the perfect ending to the series, although the ending is devastating and is sure to divide fans and casual viewers alike.

If you’ve already seen the latest episode of Sabrina Part 4 on Netflix and need an explanation of what just happened, you’ve come to the right place. Here’s the breakdown of what happened to Sabrina, Nick, and the rest of the characters. If you haven’t seen the latest episode of Sabrina Season 4 yet, bookmark this page, close the tab, watch, and come back.

Explaining The End Of Season 4 Of Sabrina’s Chilling Adventures On Netflix!

Well, the good news is, either by accident or on purpose. Sabrina’s Chilling Adventures is coming to a pretty definite end. With Sabrina Spellman dead and in the version of the series Paradise. Ready to live forever with Nick Scratch. Your mileage may vary depending on how you feel about this finish. But let’s break down what happened along the way in case you get confused.

In season four of Chilling Adventures of Sabrina, Greendale was attacked by eight Eldritch Terrors, though the last three were down to one. While she was trapped in a malevolent solar system called The Cosmic. Sabrina Morningstar, aka the Sabrina who once lived in Hell, was doubly caught up in a comedy version of the New Adventures of Sabrina that featured Sabrina the Witch’s original aunts. They are Beth Broderick as Zelda Spellman and Caroline Rhea as Hilda Spellman. The series also included a talking version of Salem the cat, a puppet version. What was missing in this series from the beginning?

Unfortunately, this version of Salem turned out to be an Eldritch terror called The Infinite. Though she feared Eldritch’s final Terror: The Void With the Void of the Void attacking the Cosmic, Sabrina Morningstar escaped with the Infinite to return to “our” Greendale, dying in the meantime. The Infinite is also dead, leaving the Void as the final terror, ready to consume all that exists. 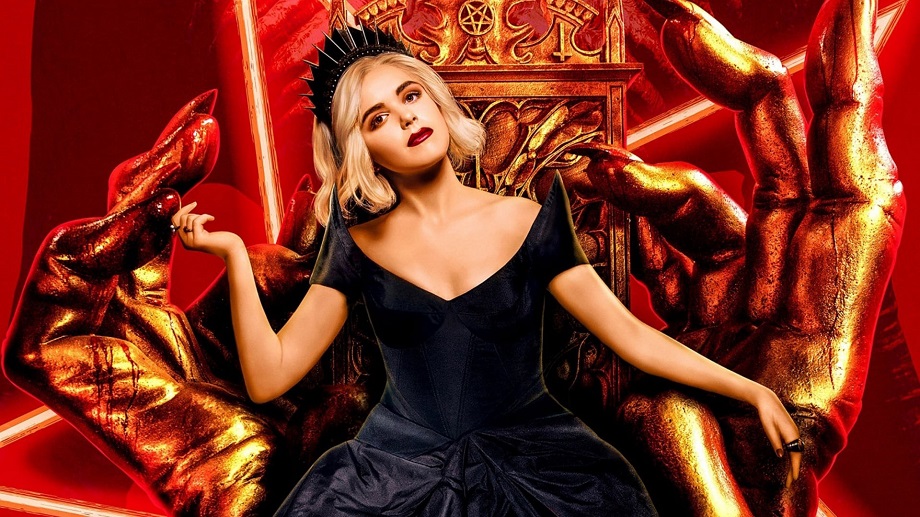 Thanks to the reappearance of the Trinket Man, a mysterious being that may or may not be God. Sabrina came into possession of Pandora’s Box. As The Trinket Man explains, Sabrina could use the box to suck up the void inside, with the only limitation that if she didn’t time things correctly, it would be sucked out as well. So Sabrina traveled to the Void herself, closing the door behind her. And she found herself in a scattered space in which the words “THE EMPTY” were literally written.

She started using Pandora’s box. And she came very close to stopping The Void until the real Spellman, Zelda, Hilda and Ambrose, and a few others sucked Sabrina Spellman’s soul out of The Void, and into Sabrina Morningstar’s dead body. Sabrina was furious, but even worse, it turned out that a piece of The Void had accompanied her. And because of that, whenever she got angry, Sabrina made things disappear into nothingness.

Sabrina went to the Mountains of Madness to get away from her friends and family. But she met the old fool Father Blackwood who promised to train her to use her powers in the Nether. But of course, he manipulated her to end the world. You know, like you.

ALSO READ  Will "Supernatural" Have Season 16?
ALSO READ  Disenchantment Season 3: What Is The Release Date And Time Of The Third Season Of Release On Netflix?

Sabrina, however, was not fooled as well, after being rescued by her friends and family. She revealed that she was learning all she could from Eldritch’s acolyte of terror, Father Blackwood, to defeat the Void. To do so, Sabrina had to drain the emptiness of her blood. While Nick and Ambrose saved everyone she had sent to The Void… And used Pandora’s Box to complete the work that Sabrina had started.

Everything is going well: They save everyone and The Void is trapped in Pandora’s Box. The only thing is that Sabrina bled to death, sacrificing herself to save the world. The episode ends with a double funeral in front of the sorcerer’s residence, followed by the erection of a statue in honor of Sabrina.

Meanwhile, in Hell, Lilith finally defeats Lucifer, drinks her blood, and ascends the throne. Prudence cuts Father Blackwood into millions of pieces and scatters them all over the world, ending him forever. And Mambo Marie turns out to be, in fact, the mythological character of Baron Samedi, which is quite strange.

The problem is that Sabrina is sitting in heaven, aka The Sweet Beyond, when Nick Scratch approaches her. She went to bathe in the sea of pain and died after drowning in the upstream. It’s clear that Lilith implemented some of the changes that Sabrina Morningstar wanted to bring.